Traditional vs Parallel Arms on a Wooden Dummy

The second most common question we get in regards to wooden dummies (after “What height should my wooden dummy arms be off the floor“) is, “Should I get traditional or parallel arms and what is the difference?”. So we decided to tackle that question here.

First, there is some confusion about the term “offset” arms. So let’s clear up how we use the term “offset”. You will typically hear this in something like: “the top 2 arms are offset, but the middle arm is not”. What that means is that the shaft, or tenon, of the arm that goes through the dummy, is not centered on the arm of the dummy. The middle arm is never offset (which means the shaft is perfectly centered on the arm – No matter which way you put the arm into the dummy the arm is the same height and location). “Offset” does not necessarily mean the arms are different heights because parallel armed dummies have offset tenons. What is key is how FAR the tenons are offset. 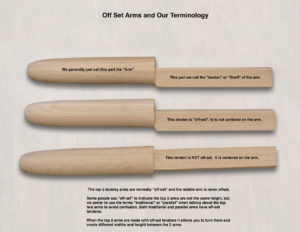 Some people use “offset” to indicate the top 2 arms are not the same height, but we prefer to use the terms “traditional” or what is commonly referred to as “parallel” when talking about the top two arms to avoid confusion. Both traditional and parallel arms have offset tenons. When the top 2 arms are made with offset tenons it allows you to turn them and create different widths and height between the 2 arms.

“The term “parallel arms” does not refer to the arms being parallel to each other (they are level with each other, not parallel). It refers to the fact that if you draw a line through the tips of the arms, that line is parallel to the floor.” 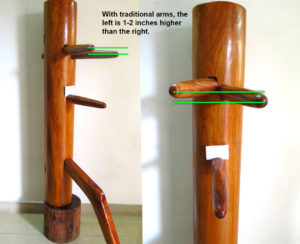 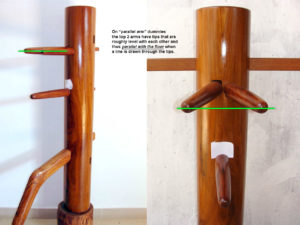 Second, let’s show you a dummy with traditional arms and one with parallel arms. We will use Buick Yip’s dummies as they are very easy to see the difference on and he makes both kinds. To the left, you will find pictures of both traditional and parallel arms on a Buick dummy. Parallel arms have the tips of the top 2 arms roughly the same distance from the floor. The term “parallel” does not refer to the arms being parallel to each other. It refers to the fact that if you draw a line through the tips of the arms, that line is parallel to the floor. We use the term “parallel arms” because that is what many sifus call these arms, even though it is not 100% accurate. The arms themselves are level to each other, not parallel to each other. Traditional arms have the left arm tip (when facing the dummy) 1-2 inches higher than the right. 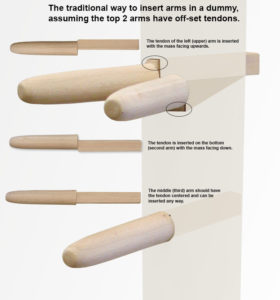 This is a good time to clear up another issue as well, and that is how the arms are placed in a traditional dummy. Because the top 2 arms have offset tenons you can actually turn both of them 4 different ways for a total of 16 combinations. But only one combination is traditional and will get you the traditional arm setting. (And actually, this is how parallel arms are inserted into the dummy as well). You put the top (left) arm in with the tenon on the top of the arm and you put the bottom (right) arm in with the tenon on the bottom of the arm. This keeps the left-right distance to the traditional amount and makes the tips of the arms closer together vertically, which is the traditional way. Of course, feel free to put them in any way you want – it is your dummy and training.

One more tip – we see some dummies that have all 3 arms with non-offset tenons. These arms have a huge difference in height level and are not adjustable. A lot of poorly made Wing Chun dummies do not have offset tenon arms, and there is not any evidence put forth so far as to why the arms should be this way; all of the arguments are on how FAR the arms should be from one another and anything over a couple inches is generally not even mentioned as no lineage we know of uses arms so widely spaced. That is just something poor dummy designs have that is not correct.

So, now that you know about off-set arm tenons, what traditional and parallel armed dummies look like, and how to insert your dummy’s arms traditionally, they question is: which arm setting is better – traditional or parallel?

Well, the short answer is that it is pure preference – or whatever your Sifu tells you. But here are some thoughts on the matter:

The WingChun dummy is made with left arm higher for a reason.

As we all know WingChun is symmetrical, movements were equally allocated on either side, however, there’s mini adjustment towards the left side, so it really isn’t 100% symmetrical.

People were born with the  tendency of the left side or the right side of the body, most people tend to be rightist because the heart is on the left side, there are still some leftists nevertheless, me for one.

In China, there’s also leftists, however, once they were spotted, the parents will discipline them to switch their habit to the right, sometimes at any cost and day and night discipline.

So assume all practitioners being rightist, the left hand (actually the left side) will be slightly weaker, adjustments were put in the practice to make up the difference.

All movements of the fist forms started with the left hand, the three punches were left-right-left.  In chumkiu the last kick is only one left kick, no right kick.
The left arm of the wooden dummy were made couple inches taller than the right arm, all these for the sake of to make up the difference through minor adjustments.

You might choose to post this on the site, only fewer people could have heard about this, or to keep it until someone comes up with the question, it’s nothing secret

So what do we think? We think that 1 argument on each side holds some weight. The arms were made in the traditional manner for a reason, but that reason has been lost. The ancestors were smart enough to make them parallel if they wanted them parallel. VS Parallel arms keep you in balance more. But honestly, there is so little difference between the two we can’t see how it matters. It is not going to mess you up to use one over the other. As a matter of fact, you need to be able to walk up to any dummy with arms at any height (or width apart) and perform the techniques flawlessly. A dummy is a tool for positioning and your position and structure are dictated by your footwork and angles of entry in relation to the opponent’s arms (which, BTW, NEVER match your dummy’s arms!). If you cannot adjust on the fly, then you are in trouble anyway. So just pick the setting you think you will like more. And if you really can’t decide, then get a dummy with arms that are switchable between parallel and traditional.

Hope that helps some!

2 thoughts on “Traditional vs Parallel Arms on a Wooden Dummy”