How does one go about taking on the challenge of compiling a complete discography covering the entire Ip Man Wing Chun system? Sifu Wayne Belonoha submits a comprehensive overview through nine Blu-rays covering more than 13 hours of information and demonstration of Siu Nim Tau, Cham Kiu, Biu Ji, Wooden Dummy, Long Pole and Butterfly Sword forms. This review takes on the challenge of breaking it down for our readers.

Creating a virtual live interactive training environment, Sifu Wayne has every base covered in ensuring that the experience of his instructional volumes is a virtual supplement that thoroughly meets the criteria for a practitioner to learn and evolve their understanding, practice and skill set. There is an abundance of quality material to learn, work and reference from, with a personal seminar experience. Class is, digitally, in session.

Throughout every section are in-studio and green-screen supported computer generated graphics content, such as calligraphy and definition banners, Wing Chun idioms, “homework” assignments, and a progress meter, which is lightheartedly broken up with comedic soundbites mocking demonstrations of how techniques should not be performed. The delivery creates an interactive vibe with the audience, similar to a series of private training sessions.

Each of the empty-hand forms has over a dozen different sections covering the expanse of knowledge and techniques to be addressed and put to work. Concise explanations, awareness of common mistakes, coupled with a constant guiding hand keep a practitioner progressing forward with proper execution with its potential efficacy. As an example, Sifu Wayne addresses the significance of the Siu Nim Tau form by saying, “This form provides the guidelines for how 70% of your techniques work.” It doesn’t take up that amount in overall run-time, but the audience will see how tactfully the evolution of one’s practice supports, and is supported with, advanced techniques built on the system’s first form.

Breaking from the documented tradition of footwork and kicking being introduced to a practitioner when learning Cham Kiu, Sifu Wayne immediately draws attention within the volumes covering Wing Chun’s first form, highlighting the importance of mobility by learning to attack with Circle Stepping, Shifting, Front Kick and Side Kick activating the sum total of a practitioner’s faculties as functional components. Elaborating further on the employment of direct lines, angles, and ranges to not only attack, but also manage an opponent’s attacks to evade, control, and counter with a secure maintenance of selfcontrol and of personal space.

Another instalment in foundation building is the introduction of Bong/ Laap Da Drill and Single Sticking Hands. Consistently thorough throughout communication addressing that evolution without solid fundamentals only serves unstable habits that will be compromised in a real encounter. The first drilling exercises round out the first two volumes to serve up the signature partner training method of Chi Sau or Double Sticking Hands.

Sifu Wayne has set the table of, “learning to protect the centre by keeping your hands on centre… not get in the habit of not running after the hand,” with these remarks as part of opening statements in the third volume reinforcing Centreline Theory with further insights of development through Chi Sau. With an engaging student aiding in this next phase of demonstrations, we are presented with the blueprints necessary with focused objectives relative to developing appropriate attributes that complement the defined actions. The audience has a chance to “connect” with a training partner in order to start working reflexes, responses and reactions with a vast amount of drills provided.

An entire disc is exclusively dedicated to Chi Sau practice, summarised by a section known as Unstoppable Attacks, which he notes, “are not a secret to success… (but) techniques that give you an edge.” A comment that philosophically embodies the efficiencies that attained reflex action development provides to handle an opponent effectively.

So far, we’ve only covered three of the nine discs, which should give the reader an idea of just how expansive this bundle is. Cham Kiu and Biu Ji also are served well over two volumes each. Within the volumes exploring the second form are new techniques and subjects such as Sticking Legs, relative Double Sticking Hands drills, Heavy Energy Chi Sau, Explosive Energy Punching and a virtual scenario introduction to new chapters that continue to be expanded upon in the following volumes known as Fight Simulator. This new segment bridges the practitioner from the controlled confines of the school environment toward an opponent engaging distance and person. Each segment, logically, adheres solely to the concepts and actions explored up their points of presentation expanding on practical applications.

With the three forms invested in over 80 chapters and seven discs, the viewing audience will be pleased to see the three exciting training components rounding out the last 28 chapters of the Wooden Dummy Form, Long Pole Form and Drills as well as Sticking Pole exercises, and the Butterfly Sword Form with the same commitment to detail. Each section of the training implements are given their own distinct chapters for the viewer’s capacity to review and easily bookmark (both figuratively and literally, as Sifu Wayne’s books are referenced throughout as added studying materials) to easily navigate and parallel one’s interest and progression rate.

Many, over the holiday season, will gather around the table to celebrate family and friends with tempered anticipation for what waits in surprise as a gift. Those passionate about their Wing Chun that greet a training day with the same fervour of a child knowing that one of those gifts is a special one for them, will no doubt be hoping that this Blu-ray disc set will be wrapped and waiting for them under the Wooden Dummy; a cool gift to warm the mind and muscles for a cold season looking ahead to skills that spring anew. 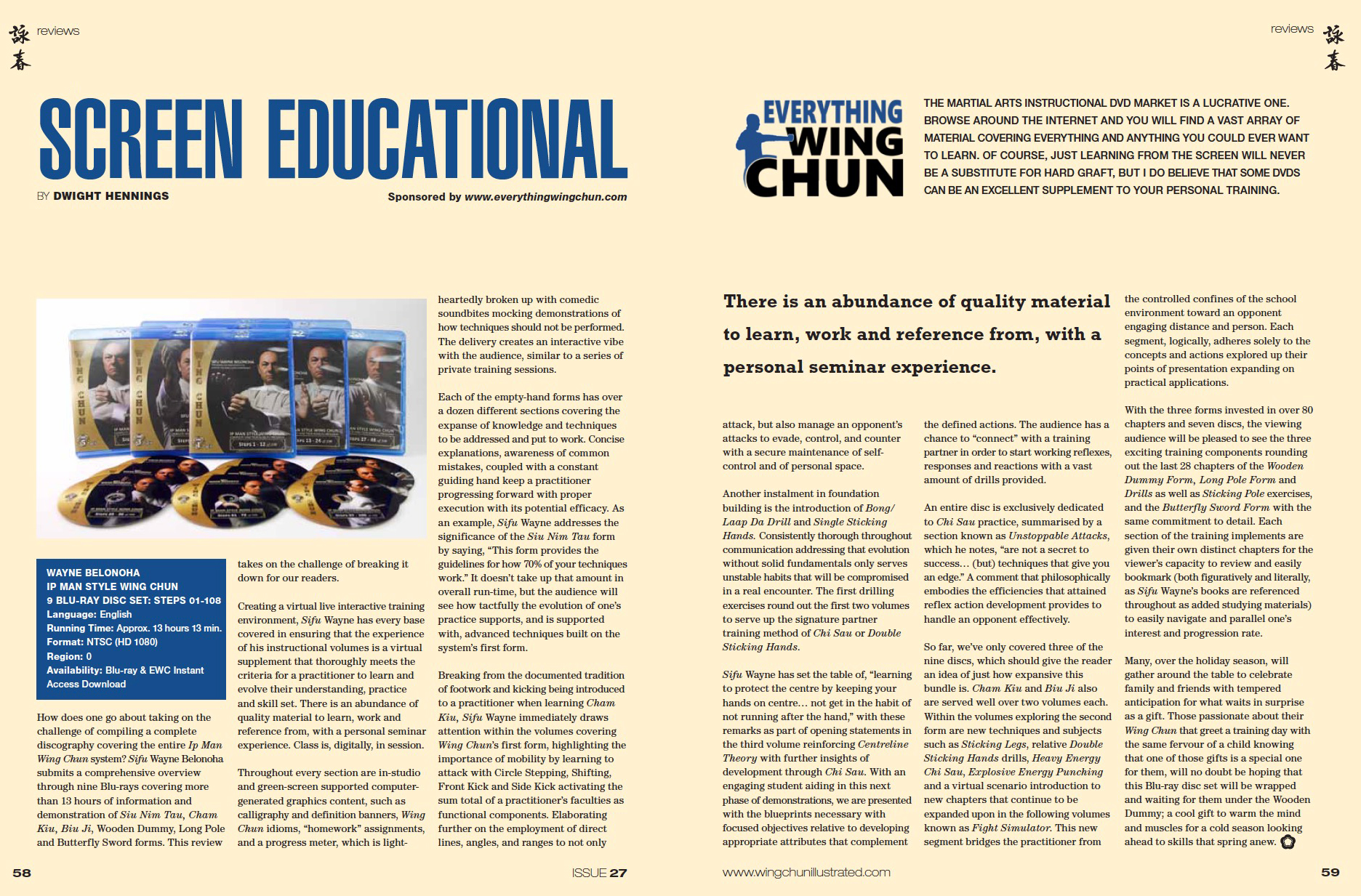