Reactivating Your Joints for Great Chi Sao is Sifu Fernandez’s 27th Wing Chun University Lesson. Limber up to get ready for a lesson on loosening up as Sifu Fernandez takes a look at not only having proactive, but reactive reflexes to help one unlock Chi Sao’s potential. That sometimes what’s being blocked is not your training partner’s or opponent’s attacks as is the limited reaction of to how to respond to being tied up in the traffic jams of arms and positions of engagement. “How many times do you feel this way and don’t know what to do about it?” he asks. It should be noted that Sifu Fernandez also embraces the potential of digital downloading, as this video presentation comes with the original 2013 piece together with an updated 2014 module.

The 90 minutes that follow explore how to unlock a practitioner’s joints and reactions to improve their skill sets. The intention of this production isn’t to demonstrate the common Chi Sao drills of attack and block, nor the he/she-does-this-then-you-do-that method of drilling. Rather, to develop greater dexterity as a foundation to have more fluid reactionary behaviors to support those attacks and blocks so that when your opponent plays “that”, the response comes as second nature and is controlled. An approach on how to add another element of maximizing the effectiveness of a practitioner’s striking and blocking actions.

What’s the first point of focus? That’s right—relax. Sifu Fernandez advocates letting go of the natural tension that muscle activation can cause through a simple warm-up performed one arm at a time to work on one’s bridges rather than the shoulders. All the while, “activating the ligaments and a lot of muscle groups with zero pressure.” These opening exercises will also be introduced in both close and distanced ranges to prepare for the next step of getting into double hand Chi Sao reflex and joint training.

Moving on to the next phase is the gradual infusion of the hand actions, as they are familiar in name and structure such as the Taan Sao, Chum Sao, et al. Realizing the potential of those elastic tendon, ligament, and muscle groupings as they relate to different angles and energies. Sifu Fernandez advocates that one is, “activating those circuits” to be as free as one can be in letting the technique of choice fly and flow into action.

Where oftentimes a martial artist works from the ground up via the stance through the waist and ultimately the arms, the exact opposite is presented here. Deprogramming the tension that the arms can fall prey to because of fatigue and the dependency on them from over invested muscles. Then once those limbs have found their form, the ever important activation of the waist follows,complemented by basic footwork to support the overall technique from wrist to ankle.

Sifu Fernandez serves up a liquid solution to those sticky situations helping you get out of those tight spots—putting those joints to work while getting them loose. Get in, get out, and get results. 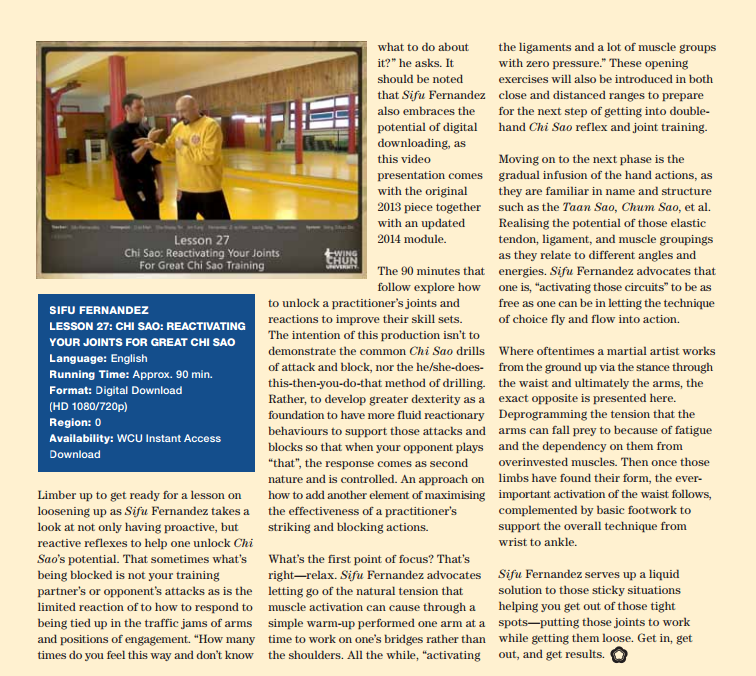