Fans and supporters of Sifu James Sinclair’s UK Wing Chun Association are in for a treat with nearly three hours of video footage covering demonstrations, presentations, and instructional components to make up this 21st Anniversary Celebratory Conference DVD. Settle in and book an evening for a volume of footage that is entertaining as well as insightful into the system and approaches that Sifu James presents in his brand of Wing Chun.

The first chapter kicks things off with a demonstration of skills through some choreographed exchanges that gets the audience’s attention and applause instead of the more popular tutorial approach of most video elements to a well-attended conference.

The practical application demonstration, or combat applications, then evolves itself into a more “free form” exchange from the students of the Sifu Sinclair’s system complimented with the demonstration of the three empty-hand forms, the Wooden Dummy, the Wing Chun Long Pole, and Bart Cham Do, performed by his students and select instructors. They strike a good balance between demonstrating the techniques while keeping the audience, and viewer, entertained for this opening block.

Being a UK-based association, this video production reflects the international cultural mosaic that makes up the modern identity of the Union Jack through the interview section of the second chapter. The viewer sits down with students and esteemed instructors of Sifu Sinclair’s Wing Chun as they are interviewed with demonstrations of their practice and skills spliced into their respective sections. The interviews are candid and personable with accounts of their own experiences while celebrating the community brought together under the Wing Chun banner.

Throughout this whole volume aren’t just demonstrations from this particular anniversary gathering, but also some archival footage of Sifu Sinclair and his instructors at home and abroad at events such as the 2nd World Wing Chun Conference in 2005 with extra regional tour footage from the visit.

If you were wondering when you got to see Sifu Sinclair get into the mix he takes the spotlight of the demonstration presentation with a block of time focusing on his Wing Chun kicking system. He covers kicking concepts and applications with the street fight psychology that goes along when mixing it up in a domestic situation. His experience as an instructor is evident with how efficiently James presents this kicking section with a lot of information and content.

Virtually everything that Sifu James Sinclair offers as part of his Wing Chun syllabus is presented here with some extra features that practitioners of his system will be treated to. A well put together memento of a significant milestone and a celebration of the journey that brought his community of instructors and students to this point. 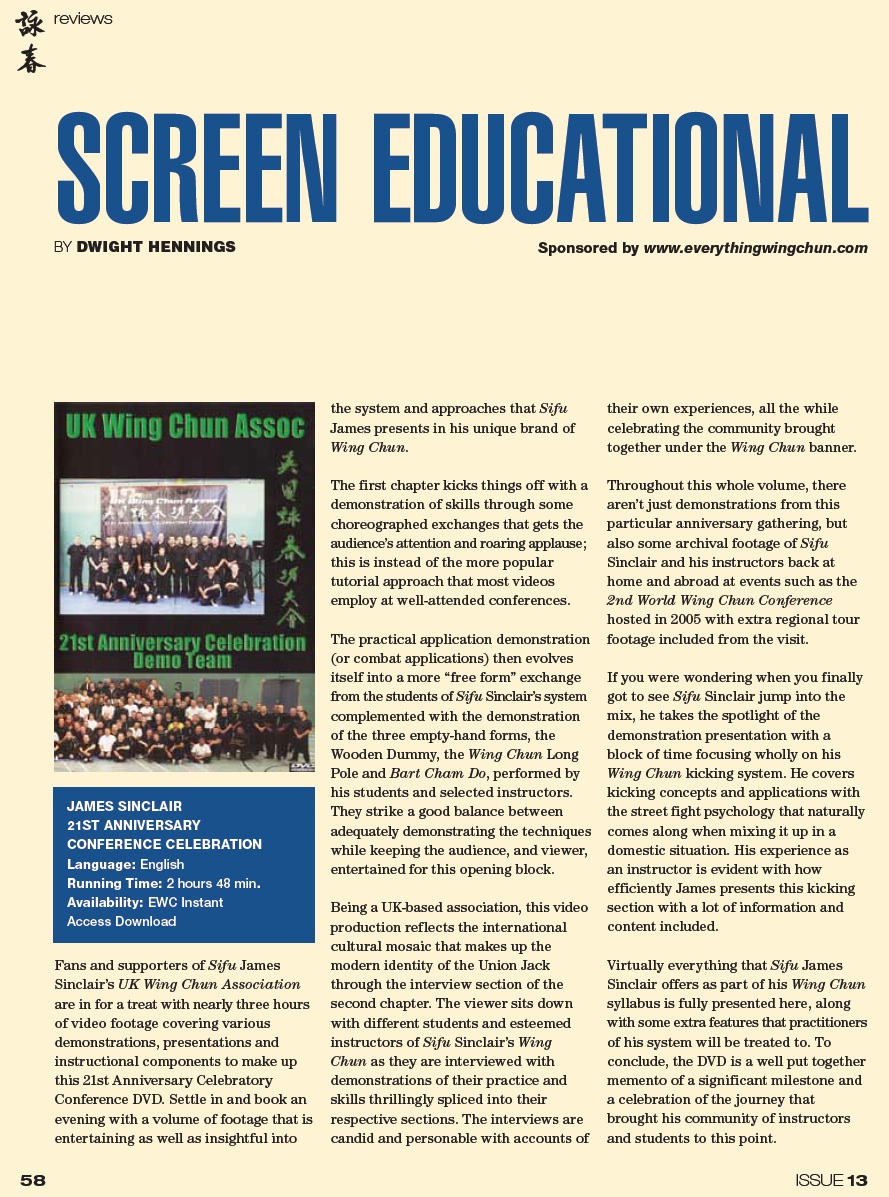