Arguably, the most concise and scaled down of the weapons is the Wing Chun Dragon Pole and its form of Lok Dim Boon Gwan, which translates to, “six-and-a-half-point pole”, but translates further to multiple points of concepts, practice, drilling and application.

Sifu Sam Chan serves his offering of the efficient long weapon of the system in just as concise a video instalment, with a 23-minute scripted runtime, from his school, with narration to guide the viewing audience through each point made.

Before spearing straight into the content of the weapon, its terminology and play, there is a historical account of the ancestors that propagated the popular apparatus from the Shaolin Temple to Wing Chun’s patriarchs, to influencing and finding a place in other traditional Chinese Gung Fu styles, to modern times.

Sifu Sam Chan sets the foundation by first introducing the supporting, “Horse Stance… that is sturdy” when employed in practising the Long Pole and how one should activate the relative footwork in motion. “Cat Stance prepares you to move freely” and is just as nimbly presented in a demonstration as it is explained. Next step, exercising, “Stepping Thrust Punch”, which prepares one for the practice of the weapon prior to wielding the lumber.

With fundamental basics in place, the next topic quickly covers basic Long Pole exercises to condition and strengthen the body. These include “Wrist Strength Exercise” and “Upper-Body Strength Exercise” as offered by Sifu Chan. Measuring the grip with stable fortitude prepares the practitioner for finally getting to play the weapon and its techniques.

Bil Gwan is first up, with attention to the range of motion of delivering the action, broken down with attention to the smaller details of executing it, covered from start to end. Dan Gwan and Til Gwan follow up, working the fulcrum of movement from top to bottom, to “generate a proper snap with the pole.” Soo Gwan, Seung Lan Gwan and Kam Gwan cover the arcs of play next, while having the former and latter techniques demonstrated in static positions and with accompanying footwork.

With the pieces in play, the whole of the Lok Dim Boon Gwan form is demonstrated in real-time speed, advocated by Sifu Sam Chan, then shown again in a diligent pace for the audience to analyse the intricacies of the movements and angles employed, and then broken down again into individual slow-motion frames of each technique in a variety of camera angles.

Individual practice is then complemented by partner drilling. It includes everything from simple action and reaction patterns, which grow into predetermined attacking actions from a training partner wielding the same weapon, and evolving to more live attacks with both pole and swords.

This video release moves through its content quickly as though metaphorically alludingthat one’s practice should be equally agile and brisk when playing or applying the Wing Chun Long Pole. Many points hit. Many to practise. 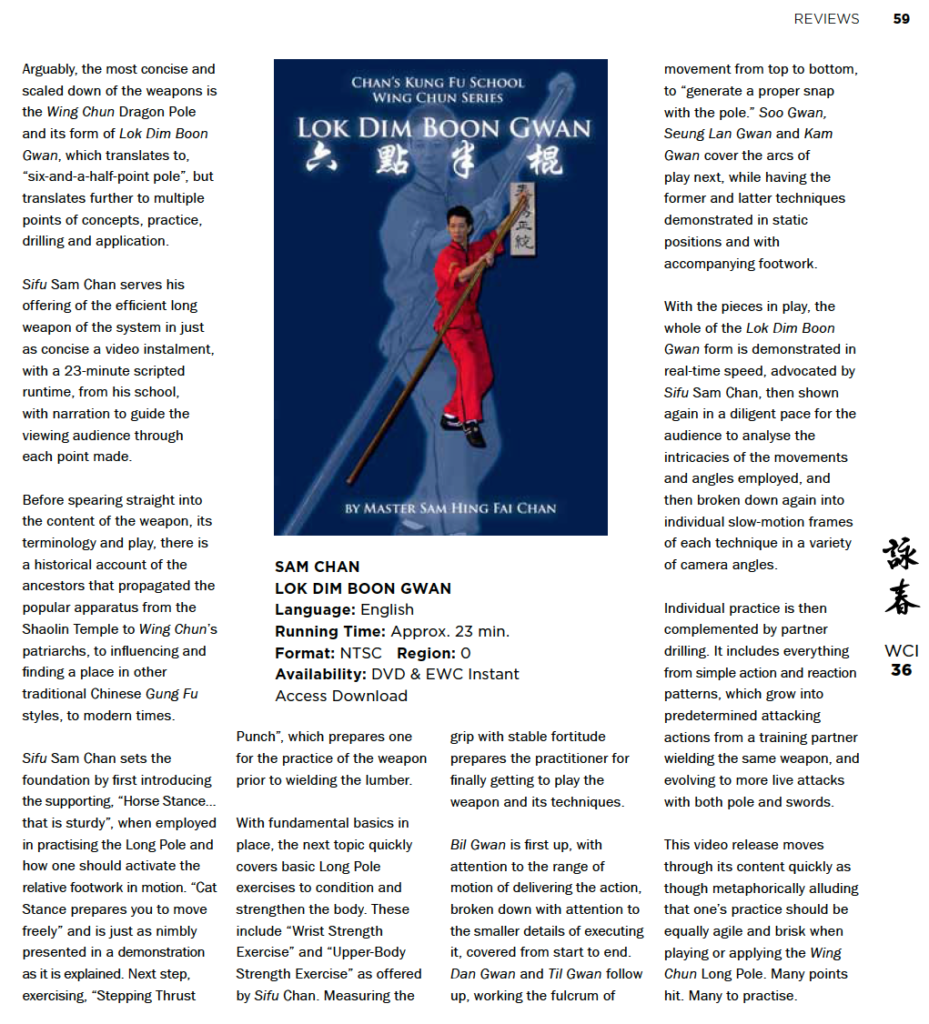