Martial arts, as paralleled by other disciplined pursuits requiring the development of one’s body as an instrument, have been referred to as one’s ability to communicate uniquely and honestly through the expression of one’s body as it acts and interacts in any environment. Wing Chun is one art that often uses the phrase, “talking with the hands,” with Sifu Harinder Singh Sabharwal opening the lines of communication and attacking with this extensive release that comprises three DVDs in a well-produced digital instalment. Over three hours of concepts, subjects, strategies and scenarios are explored to turn the talk into walk. 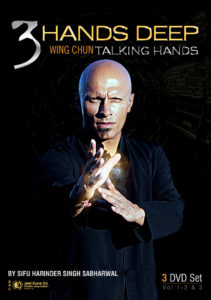 Sifu Sabharwal engages the audience, opening the dialogue by saying, “your attributes have to be developed,” to manage the most crucial moments of confronting an opponent in which both parties are at range to inflict maximum damage with an array of techniques. The ranges addressed in the first disc are Kicking, Punching, Trapping, Clinching and Ground Fighting Ranges, and how Wing Chun may be adapted to those ranges to manage a trained attacker or opponent, who will present an array of techniques that may be foreign to what one has been practising within their training environment. The variety of fighting styles of other martial arts’ attacking methods are infused in the demonstrations to introduce the diversity of potential attacking techniques, developing recognition and management of space and person to employ the reflex responses developed through Chi Sau and other methods of drilling.

“We really have to study our opponents’ (fighting styles) and get it down to apply our art,” imparts Sifu Sabharwal, addressing that being proficient in one’s own environment does not mean it will translate to an external engagement. A wisdom born of fighting experience that one cannot underestimate the potential of an adversary nor rely on the pride of whatever one’s style or system of choice is to prevail over anyone and anything, and that other person will not be a live entity, determined to inflict an equal or greater amount of damage as the engaged practitioner.

Moving forward to the second and third discs of three, the presentation takes a close-range look at what Wing Chun techniques best correspond to those potential attacks, with an understanding of range in place. Most two-handed moves, such as Taan Da, Laap Da, Paak Sao and Kwan Sau, are given detailed looks, relative to what offers the optimal real-time counteraction to manage the elements of intense, determined aggression that anyone may be confronted by when the fight is on.

The majority of violent confrontations are initiated verbally and end physically with the most important exchange happening via the universal language of fighting. When diplomacy fails, your training should not. And this is a video instalment that will keep you on your toes, feet and in the game, serving up practical insights, skills and methods to make your point with a solid finish. Period. 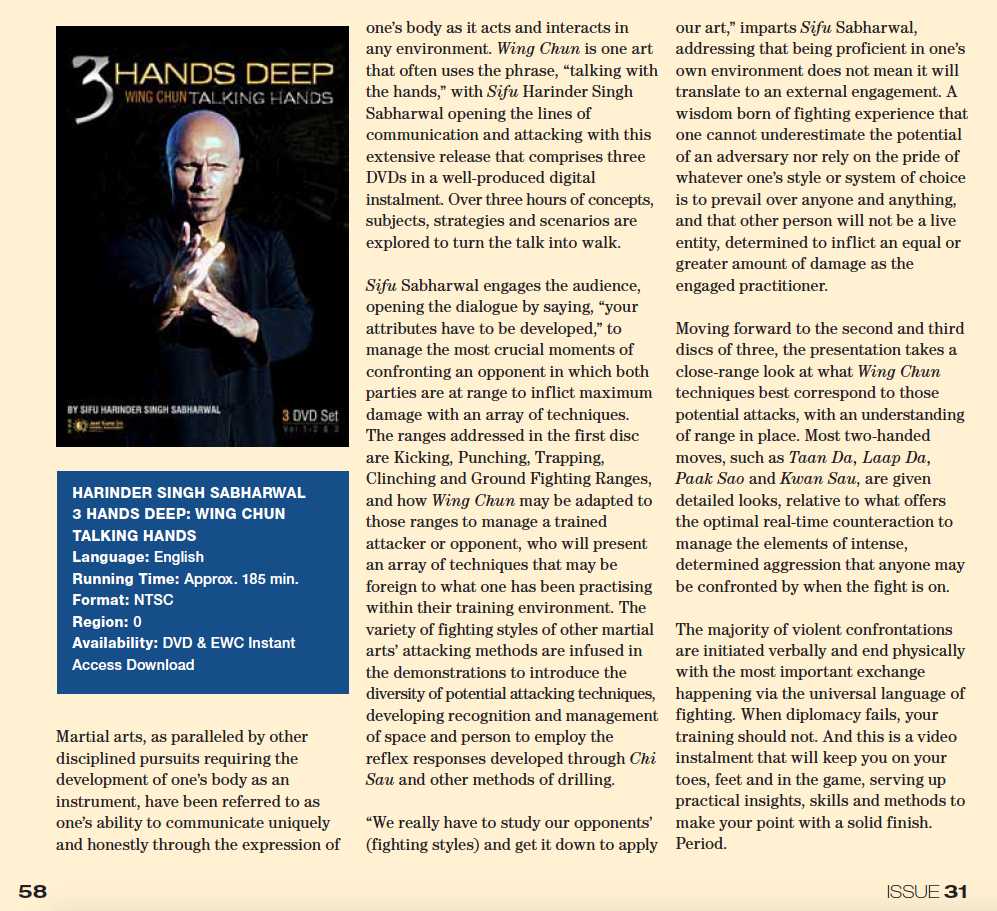 Published six times a year by Mui Fa Publishing, Wing Chun Illustrated is a perfect bound, full-colour, glossy publication. Each 60-page issue comes packed with in-depth content and feature stories by and about the world's greatest exponents of Wing Chun, regardless of lineage or style. The magazine is available as PRINT-ON-DEMAND and DOWNLOAD (iOS, Android, Kindle Fire, and Web).