Any practitioner who is passionate about Wing Chun has a thirst for all of the knowledge that they can withdraw about the system. That desire to learn more about its history, concepts, actions, and applications with their corresponding native terminology and their definitions, promotes a connection to the heritage of the system’s Southern Chinese origins and where it flourished in Hong Kong.

The regional Cantonese language is particular about the right use of tones when pronouncing words and any deviation may change the meaning altogether. Sifu Sam Chan presents the list of relative terms and their English translations in this half-hour video production for the aficionado.

Sifu Chan gets the viewer on the path of martial arts bilingualism by articulately breaking down the proper pronunciation of each word slowly, audibly, and while employing the correct tones. If one has ever taken a language course, you will see the parallel teaching methodology in repeating words first at a normal speed then repeated at a reduced pace to give the audience an opportunity to voice the words along with him. Starting things off where every practitioner does with the offering of all of the forms from Siu Nim Tau to Muk Yan Jong as well as the proper way to say Wing Chun in its native tongue.

Keeping your notebook busy, the presentation moves on to the abundance of stance and footwork definitions as they appear in learning sequence. At this point of the video, Sifu Chan complements each name of stance and footwork such as Siu Nim Tau Ma, Chum Kiu Ma and Juen Ma by reinforcing them with those actions in motion from both a front facing and sideways, or angular perspective. Although this production is not chaptered and rolls along at a good pace, the content is revealed in blocks and then revisited as a type of review so that the fast stream of terminology doesn’t seem too overwhelming.

The sequence of hand actions played in the forms as they appear in their order is paralleled in presentation for the most part. The first form’s hands are shown as they appear in order with the addition of some two-hand actions such as Gaan Sau and the partner drilling exercises of Chi Sau. Techniques are shown to establish the subject in play without the complete demonstration of the forms themselves, as is the objective behind this video installment to identify and define each move.

As an interesting cap to the terminology overview, Sifu Chan demonstrates each Dummy (Muk Yan Jong), Pole (Luk Dim Boon Gwun) and Knives (Baat Jaam Do) action both in static positions and in motion. Although, through the training regimen of the system, these would be the final elements of the system taught to the student, the last piece shared is an outtake of his teacher Ip Ching in action from a hosted seminar, where he brings the terminology to life with a controlled display of his skill sets. 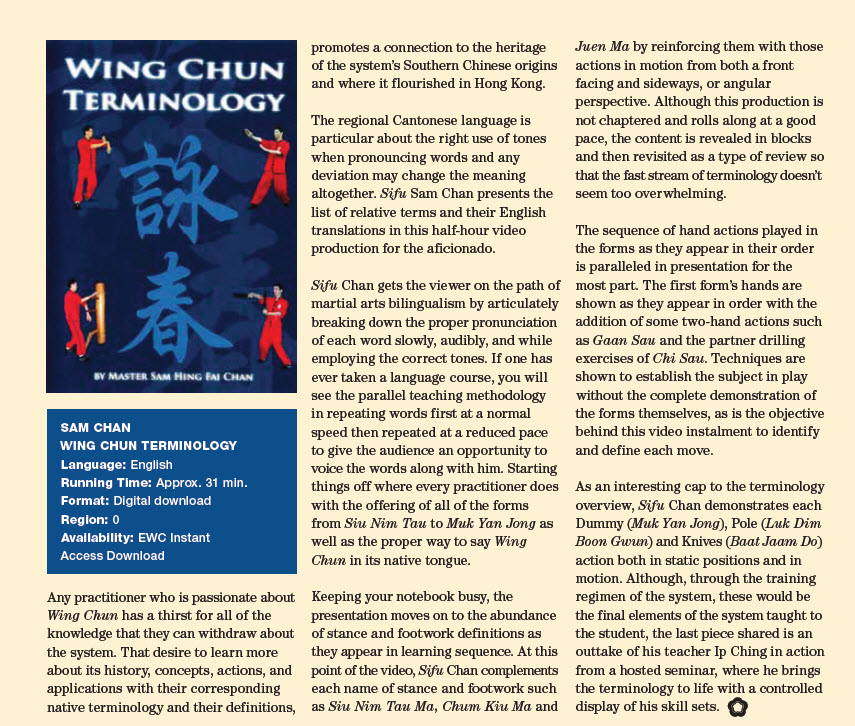