Presenting his Close Range Combat Academy’s six-and-a-half pole, Randy Williams covers the fundamental details during seven chapters of this DVD presentation. Not a minute goes by in this well-filmed, up-tempo, 55-minutes in-length offering without a flood of information being shared with the viewer while in demonstration.

The formatting of the chapters helps the viewer to navigate and review information that is in a good enough resolution for pause and play of the smaller details. The dedication to the subject of the pole in this installation provides the foundations to the Close Range Combat Academy method of form and practice. The viewer is guided through: “Pole Details”, “Pole Drills”, “Pole Footwork”, “Form Overview”, “Look Deem Boon Gwun”, “6½ Strikes of the Pole”, and “Applications: Pole vs. Pole”.

Randy gets a quick grip on the manual means of tailoring the pole to fit the individual’s needs. Now that the viewer has got a tight grip on their weapon with the base ideas firmly in place, the focus moves forward to the stance. It’s time to get to work with a series of rigorous strength, conditioning, and controlling exercises designed to build those attributes through over ten different drills that compliment the relative
techniques found within his system’s form.

Continuing to work our way from the ground up sets the centre stage for “Pole Footwork”. A variety of stances are introduced in their Cantonese names with the relative English definition in homage to what Randy cites as the origins of Wing Chun’s long weapon passed down through boatmen from
their, “origins in Shaolin.” Footwork moving patterns flood the screen during this information condensed breakdown, jumping from movement to movement to a distinct jump that is practiced as a footwork method is employed.

We move from class to grass with a tandem outdoor demonstration of the footwork, its pole actions, and an example for the practitioner to reach for with their skill in the playing of the form itself. The clip features Mario Lopez who adds his support in demonstration, followed by a solo performance by his teacher who displays ambidextrous proficiency in playing both sides of the form with an equal amount of skill and control.

The most time-dedicated chapter in this DVD is the centrepiece, and by this point, most viewers may have tired arms to perform it themselves if they tried to follow with every drill up to this moment. The step-by-step break down of each point, and a half, that makes up the techniques of the Look Deem Boon Gwun form, which Randy Williams says, “Is done 72 moves on one side and repeated on the other side.” An extensive set of techniques with an equally extensive explanation of how to make them work effectively. They are also broken down with name and numerical designations to connect or review the dots.

This DVD sticks to the practice of an extensive traditional form with an extensive pool of resources to draw from. The viewer may be able to watch
its contents in an hour, but will find one’s self-reviewing its content for a long time to come. 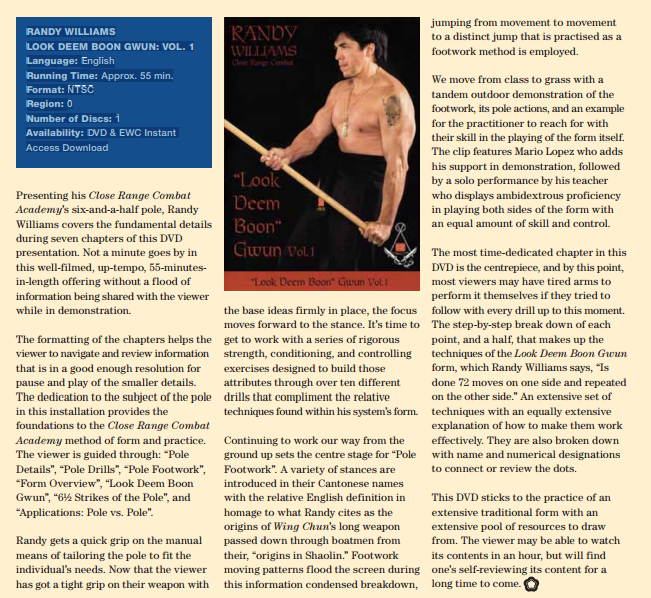