This training video is presented in five basic categories. Instruction starts with preparatory drills, to condition one’s arms in striking the dummy using the basic techniques while hitting the Jong arms, from there outside and inside position. These preparation drills, demonstrate the fundamental hand techniques of used in Wing Chun, such as the Tan, Bong, Gong, Quan, Huen and the Double Jut Sau. The form is broken down into ten training sections, demonstrating the various hands and kicking techniques of the Muk Yan Jong form. However, there is no demonstration showing how the various Wing Chun, hand and kicking techniques are used in applications. Sifu Jordan, demonstrates the wooden dummy form at full speed and has, two of his instructors present the form as well. Of further interest, the Muk Yan Jong shown in this video, its leg stake is bent with its end pointing downward toward the main body of the Wooden Dummy. This simulates a person standing with a natural posture versus an opponent extending a leg slightly forward.

The general format of this video is the same as other productions of this type, on learning the form and training with the Muk Yan Jong. Sifu’s performance in teaching, the wooden dummy form is shown from different camera views. The overhead and split screen camera shots are a positive aspect of this video. 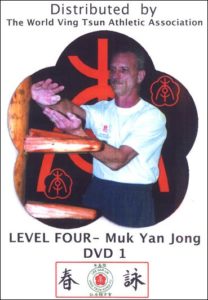 From what I could see, Sifu Jordan is tall in stature with long arms and legs. I’m assuming his physical stature, dictates his style in using Wing Chun. This could be a definite advantage for someone of his height. Sifu displays power in his applications on the wooden dummy, however, he lacks flexibly in the waist and upper portion of his body. But for him, because of his physical stature, perhaps he doesn’t need it! I’m sure he’s capable in preventing anyone, from getting inside or close to him. In that being said, we all have our limitations and as we get older…one, has to make adjustments.

I have only one real criticism of Sifu’s wooden dummy form, in section 7 or 8, after he uses a kicking technique, while setting his foot down, he deliberately crosses his other leg. From my experience, one never crosses their legs in this fashion, as a maneuver in getting to an opponent’s other side! In all of the Muk Yan Jong forms, I have observed, this is the first time I’ve seen this done. However, perhaps he was shown, by his teacher, this particular move allowing him to complete a technique without any risk… but, I strongly feel this is a bad habit to develop and such a movement is unnecessary. Even though an opponent has a height and obvious strength advantage, a well delivered sweep could take them off their feet. And if executed correctly, the sweep; could be done with little effort.