Clive Potter has studied Ving Tsun since 1971 and became a student of Wong Shun Leung in 1984. The Wong Shun Leung Ving Tsun Kung Fu Association was formed in 1994, with its headquarters in St. Albans, UK. It has been successful ever since with schools opening in the USA, Turkey, Germany, Italy, and Spain.

This DVD is of a seminar given by Clive Potter and his Senior Instructor Adam Cope at their headquarters. The DVD starts with some nice footage of Wong Shun Leung performing the first form, but this is a bit short with only part of the form shown, which is a pity. We then go straight into the seminar footage. Clive gives a nice introduction to the form with some common mistakes to avoid when opening the form.

What follows is a comprehensive breakdown of the Siu Lin Tao form with each section given plenty of time with some really good information on how the actions should be used. There is a lot to take in here with the DVD running for over two hours. Personally, I enjoyed the demos given by Adam and Clive, which really helped to understand how the concepts shown could be applied. Unfortunately, there is some shaky camera work here and the soundtrack could be better.

In conclusion, there are better quality DVDs available on the market, but even so, this is a good seminar containing some golden nuggets of information on the Wong Shun Leung method. 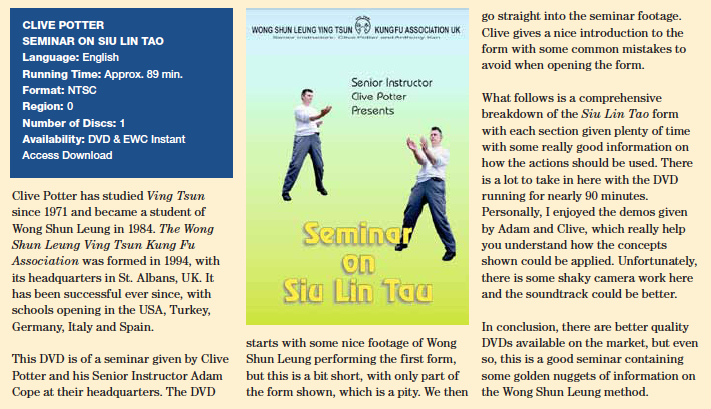