For one reason or an other I managed to speak to a handful of Gary Lam students recently. One of his students, Sifu Greg LeBlanc, completed the system under Gary Lam and I decided to ask him a few questions about Chum Kiu.

Lets see what he had to say:

EWC: How did you get involved with Gary Lam/ WSL Wing Chun?

Sifu  LeBlanc: I was introduced to Sifu Lam by a friend and student of his; he invited me to check out Sifu Lam’s class in Monterey Park. To be perfectly honest I was not interested in Wing Chun, but I had a friend who I thought might be, so I went along to check it out. I had 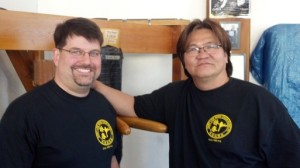 been at that time looking for a martial art teacher who understood structure; which I did not expect to find in Wing Chun. To my surprise, after watching Sifu Lam talk and teach for half an hour, I realized that I had found what I was looking for. I signed up and never looked back.

EWC: Compared to other arts, do you consider Chum Kiu to be some what high level? For example, I’ve HEARD Bruce Lee studied Wing Chun for around 5 years, and under Ip Man never surpassed the level of Chum Kium.

Sifu  LeBlanc: Chum Kiu is taking the shapes and concepts of Siu Nim Tao and putting them in motion; it introduces footwork, changing angles and moving the entire body as a unit. It develops the connection of the lower body to the ground and the hip and elbow connection, making a bridge, finding the new centerline of a moving target and controlling multiple targets. Chum Kiu’s most important section, like the Siu Nim Tao, is in the beginning. Training the balanced rotation of the hip for power and making a new angle is critical to putting Wing Chun into practice.

EWC: If someone is new to Wing Chun, what can they expect to learn from Chum Kiu?

Sifu  LeBlanc: Chum Kiu is the development of the alphabet of Siu Nim Tao into combined and moving shapes and ideas. Chum Kiu is the integrated expression of the theory found in the Siu Nim Tao. Each section is an extension of the blueprint found in Siu Nim Tao; without this cohesion, the meaning of the form is lost. Chum Kiu is divided into three sections; each section features a different use of the Bong Sau shape. The form teaches the application of Jaam as an attack, the use of the elbow to disturb, damage and to cover on an inside wrong Paak Sau. Fook Sau, Dai Jeung, Jaat Sau, Paak Sau, Faak Sau, low punching and Laan Sau are all developed. The Daan Gerk and Wang Gerk kicks are trained (stepping into a hand attack range); as are reflexes for hitting a new centerline and bringing the arms back to the centerline from low, pulled or extended positions. The Gaam Sau (aka Soh Sau) is also trained as a control for disrupting or diverting a kick. This is a brief outline, with many other ideas and variations possible as one goes deeper into the form.

EWC: According to the WSL/Gary Lam perspective, what is the most important concept to learn in Chum Kiu? 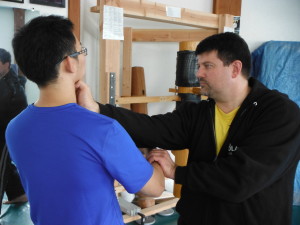 Sifu  LeBlanc: One of the most important concepts in Chun Kiu is related to the lower body being the engine or motor for the actions of Wing Chun. The turning done in the beginning of the form can be trained as an isolated drill. Mastering this solidifies the lower and upper body connections for all actions in the system and develops the balance and precision needed to rapidly change angles to make the opponent wrong, putting your triangle on them and their triangle away from you.

EWC: If someone “truly” understands Chum Kiu, how will it change their Wing Chun?

Sifu  LeBlanc: To truly understand Chum Kiu is to have a solid foundation in Siu Nim Tao; Siu Nim Tao is the letters of the Wing Chun alphabet, Chum Kiu is the beginning of making words. Wing Chun is not a technique based system; it is the study of logical ideas and concepts that will improve you’re fighting ability. The more you understand about the system of Wing Chun, the more the system itself begins to teach you. In the end, the best teacher is not what you think (or what someone else thinks), but rather what you experience and can test. Fancy ideas about what is possible under pressure are quickly dashed on the rocks of Chi Sau; it is this reality check that proves what is and isn’t creditable when your training partner (or opponent) is not compliant. In Wing Chun we must at the earliest moment of a fight move to take position and attack the center of mass of our opponent; without these principles guiding how we train, misleading ideas crop up in our practice.

EWC: When one advances beyond the level of Chum Kiu, what is the most common “Chum Kiu” mistake they make or forget? For example, is there one characteristic or concept Wing Chun people assume they understand from Chum Kiu, but never apply it?

Sifu  LeBlanc: I would say that with the exception of the Baat Jaam Do, the entire Wing Chun system is working on developing and reinforcing common skills, concepts and structure. That means that all elements of training are working to harness that same direction in development. No one part should be trained more than another and all training should be seen as not only making your own Wing Chun better, but also actively trying to help your training partner improve as well.

EWC: Is there anything you feel is rarely discussed about Chum Kiu? Perhaps something most people misunderstand?

Sifu  LeBlanc: See the Siu Nim Tao as the root for the entire system; and regard Chum Kiu as an extension of the ideas and principles found there. Practice both every day and look to them as references and guides as you train other elements of the system. All should be in agreement and interrelated to one degree or another. Never see one aspect of training as more important than another and look for the commonality and relationships to the diverse aspects of development in the system as a whole. Keep things logical, grounded in reality and as Sigung Wong Shun Leung said: simple, direct and efficient.

EWC: Do you have any final thoughts about Chum Kiu?

Sifu  LeBlanc: In the beginning Wing Chun may appear to be a somewhat large system, 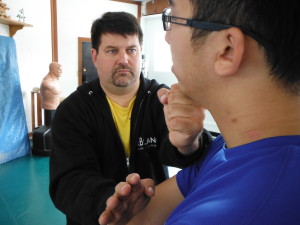 with many drills and an array of actions and responses to a threat. Each generation and teacher brings to it their own contributions to the tradition and each teacher lends their own particular strengths to how it gets past on. Ironically the longer you study Wing Chun, the smaller the system will appear. At the most advanced levels Wing Chun becomes a vertical fist punch; relying on Courage, Power and lastly Skill for implementation. The complexity and sophistication of the system are housed in simple and powerful actions, delivered directly and decisively to the head or neck of your opponent.

I’d like to thank Sifu Leblanc for interviewing with us! It is always interesting to hear from a high level Wing Chun practitioner.

If you are interested in contacting or studying with Sifu Leblanc, please go directly to his website leblancwingchun.com

What do you think is the most important aspect of studying Chum Kiu? Remember to share your thoughts in the comments below 🙂

Coordination and adjustment of upper and lower torso along with locking the tailbone area for maintaining body unity. Bringing in the theories and concepts to a further level of understanding while in whole body movement. I believe this is only the first stage of development in learning the “chum Kui” form, the mechanical stage or classical stage, which if truly worked on, will lead one to the, non-classical stage or freedom of expression in your movements. Peace!

Sifu LeBlanc’s interview was quite rewarding and simple to the point. Like the theories and concepts of wing chun(simple, direct, and economical) at a basic classical level, but I think we should also take into consideration the different levels of development or the 3 stages of development associated when learning an art, skill, etc.. From freedom of expression to the mechanical or robotish stage and back to the point of origen the non-classical stage, to freedom once again. All in all, I give this interview a two thumbs up. Peace-out!

A very nice piece on chum kiu. Gregory is a man who not only knows how to articulate the art but also knows how to make it work. Very nice interview.