Chi Sau: A Comparison of 4 Lineages

With thousands if not millions of Wing Chun practitioners around the world, it is impossible that every single person fights the same way or uses the same methods to study Chi Sau.  Which lead us to wonder, how do other styles of Wing Chun train Chi Sau?

The goal of this article is to briefly investigate how a handful of lineages of Chi Sau. Clearly there are MUCH more out there, we happened to pick four.

The first lineage we decided to investigate is Lee Bing Choi. This method of fighting originated from Mainland China which means it is quite different from what many would consider “mainstream Ip Man Wing Chun.”   While  many WC lineages would rather go up the middle, destroying their structure and attack the centerline, this lineage prefers to displace or deflect the incoming force. 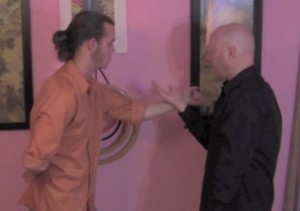 For lack of a better word, it appears they are “sucking” the opponent in the wrong direction, to the outer edge of the Lee Bing Choi practitioners gate.   Once outside their gate it gives them the opportunity to attack and take advantage of the opponent’s centerline.

If you were to watch this Chi Sau’ing method, many would relate it to Tai Chi push hands, but with Wing Chun shapes and philosophy.  The main difference between push hands and this type of sensitivity training is that a Tai Chi fighter would be willing to move their hands and body in positions a WC person would not be comfortable with. For instance, similar to when you practice Sil Lim Tao, the first section when you do 3 Tan Saus and the Wu Sau hand ALMOST touches your body.  The same minimum distance, of approximately a  fist and a half distance is always maintained in this type of Chi Sau.

The Lee Bing Choi lineage Chi Sau is interesting to take a look at. It is somewhat different than what the average Wing Chun practitioner is used to.   It reminds us that there are lots of alternative ways of thinking and training, yet we all practice the same style of martial arts.

The next stop on our journey is Leung Ting Lineage of Wing Chun (his trademark name is WingTsun). Leung Ting, the founder of this method, was a student of the late Grandmaster Ip Man. In this style of Chi Sau the hands roll in the more typical “poon sau” or rolling positions.  The interesting thing about this method is that their hands appear to be relaxed, yet they apply forward pressure while Chi Sau’ing.

Not every single method of Chi Sau is the same, many styles place a much bigger emphasis on “feeling.”  We are not suggesting this style doesn’t “feel” for incoming attacks, however they appear to stress forward intent during Chi Sau. Almost as if they prefer a much higher friction environment, allowing them to focus more on clean technique for a live combat situation. 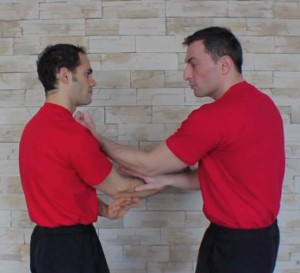 The system appears to be not as willing to step, i.e take a big step to the left or right,  as other Wing Chun styles. Rather than taking a large step out of the way, they appear to shift or take a smaller step,taking advantage of smaller angles, followed by collapsing their opponents structure by drilling in with their arms and hips.

It is fascinating to see how the Leung Ting Lineage manipulates the space in front of them. Allowing them to take advantage of fast moving environment, drill into their opponents bridge, and destroy their center.

Ip Ching Chi Sau is different from the two styles above.   If you are unfamiliar with Ip Ching, he is one Ip Man’s sons.  His method of Chi Sau is described as “light, circular and very explosive.”   The softness is NOT an empty arm  that moves slowly. Rather this style appears to be very focused on being  relaxed, very present, and mindful of what is to come. 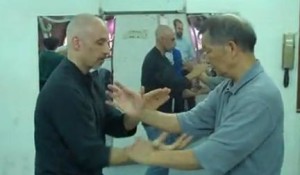 The advantage of remaining “relaxed’ is that you can feel attacks or tension in your opponent’s arm well before they take place. This hypersensitivity is often really hard to deal with, before you make any kind of movement you may have already been hit a few times.

They seem to be willing to “roll” for a while, patiently waiting for an opening to take advantage of.  Almost as if they want to feel you out for a bit, find where all your weaknesses are, then disable your structure.

If you experienced Chi Sau’ing with someone who has studied this method, you will know that it can be very frustrating.  From my experience it goes something like this: you touch arms with him or her,  followed by thinking they are not present and easy to hit, but you suddenly lose the match.

Another student of Ip Man is William Cheung, who formed the “Traditional Wing Chun Kung Fu Association”. Although he trained with the late Grandmaster, from what we understand he also studied earlier versions of the style in Mainland China (including Hung Fa Yee).  Based on his research, his method has a somewhat different point of view.

The hands are not as relaxed, we do not mean tense or rigid , but rather it has a very defined shape.  Unlike most lineages, The wrist and fingers, even during Bong Sau,  are kept completely straight.  Since the wrist is fully extended at all times, it minimizes the risk of wrist locks.

The elevation of your hands is kept at a higher elevation than many Wing Chun methods.  For example, when they are in the poon sau position, about to start Chi Sau, their hands are almost parallel with their head, allowing them to more comfortably stop attacks towards their face.

They are also more willing to step away from incoming force. Do not misinterpret this as 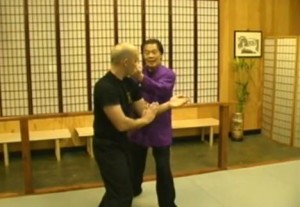 backing up, but rather moving around the force so they can re-enter at a 45 degree angle or re-position themselves.   This allows them to take advantage of the blind side of their opponent and control their body.

By taking the outside, it limits the counter attacks from your training partner.  In order for them to regain control of the center, they would have to re-position their body. Making it very hard for the opponent to defend themselves.

The purpose of this article is not to take sides, rather to briefly investigate a handful of different Wing Chun methods of fighting.  If you feel we have misrepresented any Wing Chun lineages, please feel free to comment below.

WC is considered a very individual style, the only thing your Sifu can do is guide you in the right direction.  It is impossible for them to make a carbon copy of themselves and implant the information into you.

We believe that Sifu Sergio put it best, “all the lineages have a piece of the puzzle and it is up to you to put it together.”    It is almost as if you have to find your true Wing Chun self and use what works best for you, your experiences, and your body type.

Do you know of any Wing Chun lineages to add to the discussion? If so, what makes them different or unique?

13 thoughts on “Chi Sau: A Comparison of 4 Lineages”