For this interview we sat down with James Biggica, owner of Warrior Martial Art Supply. He is very well known Wooden Dummy craftsman and creates some really innovative marital arts gear!

Since it is Warrior’s 11th year anniversary, we decided to dig deeper into James’ marital arts background and see what new products is coming out with!

Lets see what he had to say!

How did you get into marital arts?

My martial art training started when I was about 10 years old in Goju Karate. Although I lost interest after a few years. It lead me to met a Tae Kwon Do black belt Steven Fisco in high School. Who I started training with heavily for a few years. I read a lot of books that Bruce Lee had written and then joined a Jeet kune Do school in Brooklyn, New York. 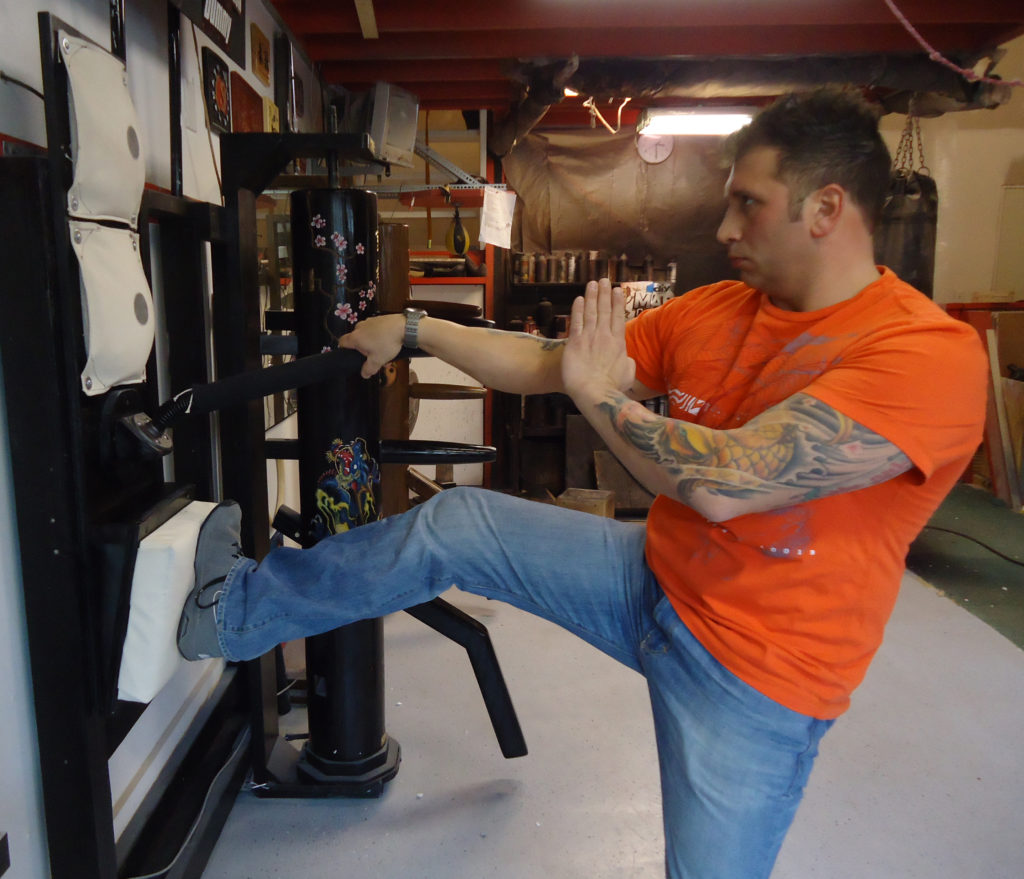 Living in a small garden apartment I decided to make myself a wooden dummy on my outdoor balcony, which took me a week to construct with minimum tools. Well the surrounding tenants must have thought I was crazy, there were wood chips flying everywhere, and when I was done they had the pleasure of hearing the clanking and thumping of the wooden dummy arms four hours at a time. I was always very focused and dedicated when I put my mind to something.

From the many books I have read written by Bruce Lee, it seemed to me that Wing Chun was his heaviest influence in creating JKD. In my opinion the simplicity and directness of what Wing Chun had to offer was the key element. Bruce Lee took this a step further and instead of limiting that element to just Chinese martial arts, he incorporated it to every form of combat. This is where my Wing Chun journey began.

I started reading up and researching Wing Chun and purchased the gold 116 Wing Chun dummy technique book demonstrated by Grandmaster Yip Man. I taught myself the dummy form from his book and to my surprise had about 90% of it correct, but it’s hard to see the transitions for each move through a book but did the best that I could.

For about two years my Wing Chun training was self-taught. I moved to the Poconos in Pennsylvania in October 2002 and at the time was out on workmen’s compensation due to shoulder injury that happened at work. With a lot of time on my hands I decided to make another wooden dummy and try to sell it on eBay. I had no idea what the dimensions were so I scaled everything from the book I was using to learn the dummy form off of Yip Mans wooden dummy.

What did you do from there?

Looking at his images you can visibly see cracks in the dummy and this is the way they were selling them. I couldn’t imagine buying a dummy that already had cracks in it and this was a normal thing.

Acquiring all of my woodworking skills from my father, Donald Biggica who was a master craftsman cabinetmaker and woodworker most of his life. I had an understanding of the limitations of wood grain and how to manipulate it. This is how I come up with the nine Board laminating process we use today for all wooden dummy trunks.

How were the dummies made back then?

Most manufacturers use one solid log cut from the forest air dried for 1 to 2 years and then they shape and cut the mortise holes to make their dummy trunk. The problem with that is you have many layers of wood in that log.

A nine inch diameter log will start drying from the outer layers first which starts to shrink while the inner core stays swollen with a higher moisture content. This is what causes a solid dummy trunk that is not laminated with multiple boards to crack after you bring it into your home and keep it at the stable warm temperature within six months to one year 90% of them will crack or split.

What we do in essence is take that same log and so it into 2 inch thick boards. All of the boards are dried in a kill down to 6% moisture for 40 days. Then we glue it back together and turn it into a cylinder on our wood lathe, in doing this the center core of our dummy as well as the outer layers contains the same 6% moisture rate so you do not have the problem of the outer layer shrinking faster than the inner therefore no cracks.

Now that I had a system I decided to sell on eBay. All of my dummies had hand-painted Wing Chun logos on the face like we do today except then we did not engrave them.

You are really well known for the graphics on your dummy, where did you pick up your artistic skills from? 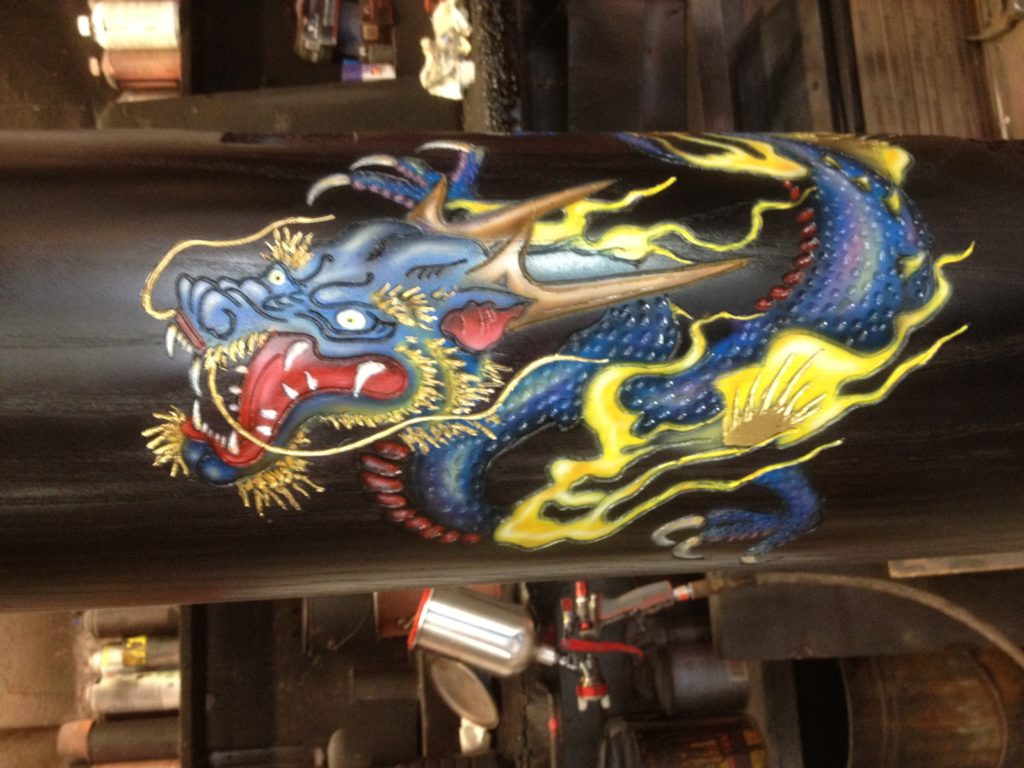 My Artistic Skills came from my mother, Carol Biggica who was an artist herself and taught me to draw at a young age. I offered the same six colors we have today and they started selling to my surprise rather quickly.

Was there any one product or event that put your dummies “on the map”?

My dummies caught the eye of Sifu Alan Goldberg from Brooklyn, New York who had invited me and sponsored dummies at the Action Martial Art trade show in Atlantic City New Jersey in 2006. At the trade show Bruce Paul owner of Immortal USA Martial Art Supply took an interest in selling my products and became my first distributor. I would say at the trade show is what launched my hobby into a full-time business and really put us on the map in the Wing Chun world.

When did you meet Sifu Randy Williams? 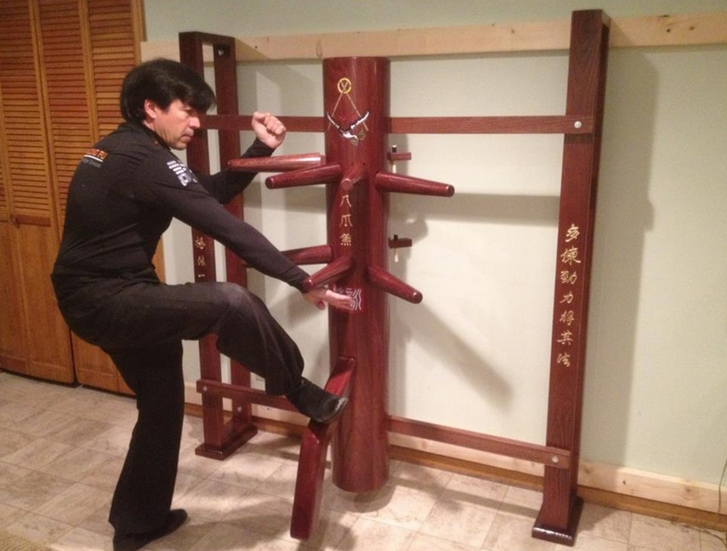 I had the Pleasure of attending Sifu Randy Williams from CRCA Wing Chun at one of his seminars in 2011. We became friends and I became a CRCA barn member and have been training in CRCA for the last 3 years. Sifu Randy had an idea for a long time of a 8 limb wooden dummy. He would go on to call it the Bot Jau Yue, translated “The Octopus”. I was able to engineer how to make this long time idea into reality, which was no easy task.

Dummy makers seem to go out of business quite often. It can be a hard business to make it in. What do you think kept you in business for so long? 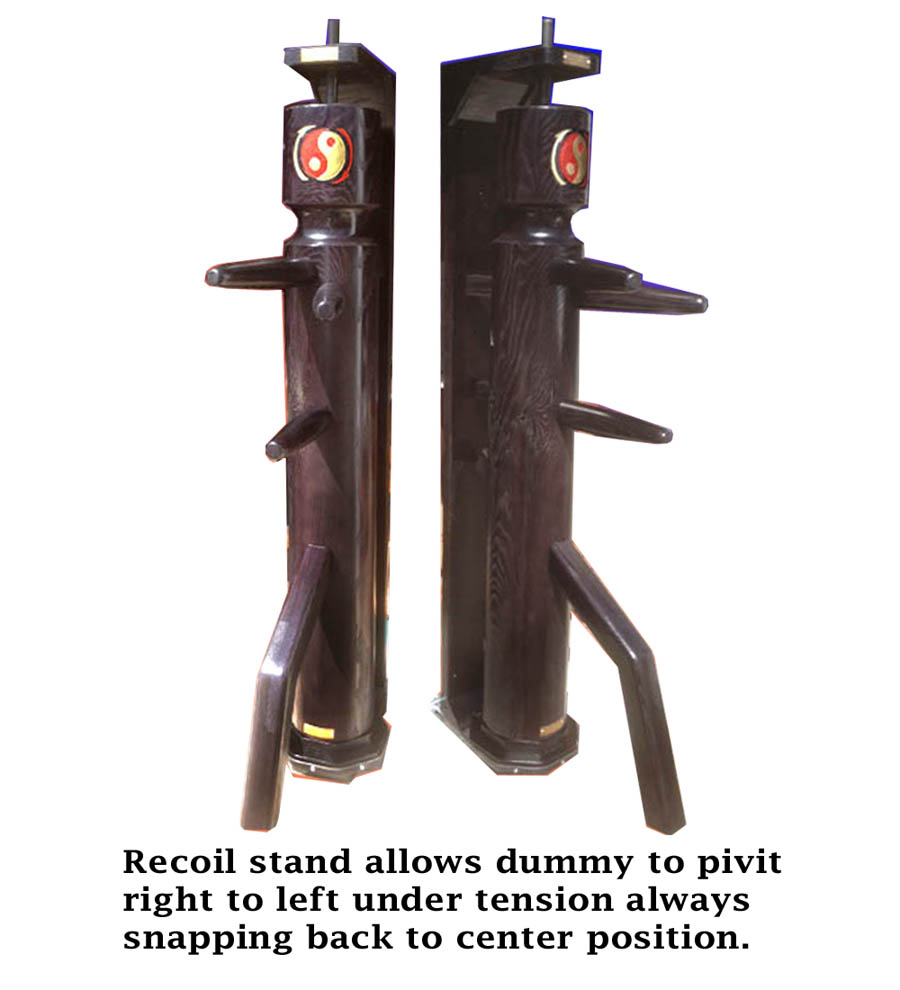 I attribute our survival in business for 11+ years to our unique product designs and awesome customer service. Products such as our Rice Bag Trainer, Recoil Reaction wooden dummy stand and are nine board laminating process as well as our custom hand carved and airbrushed dummy trunks have really put us on the map.

In 2011 we were sought out by The DYI network show Man Caves to make them a Recoil Reaction Wooden Dummy and a Rice Bag trainer for their dojo episode. We have also made two dummies for Robert Downey Junior to train on for his Sherlock Holmes movies, as well as a custom Octopus Wooden Dummy made for Zoltan Bathory from Five Finger Death Punch who is also a CRCA barn member.

What products are you most proud of? 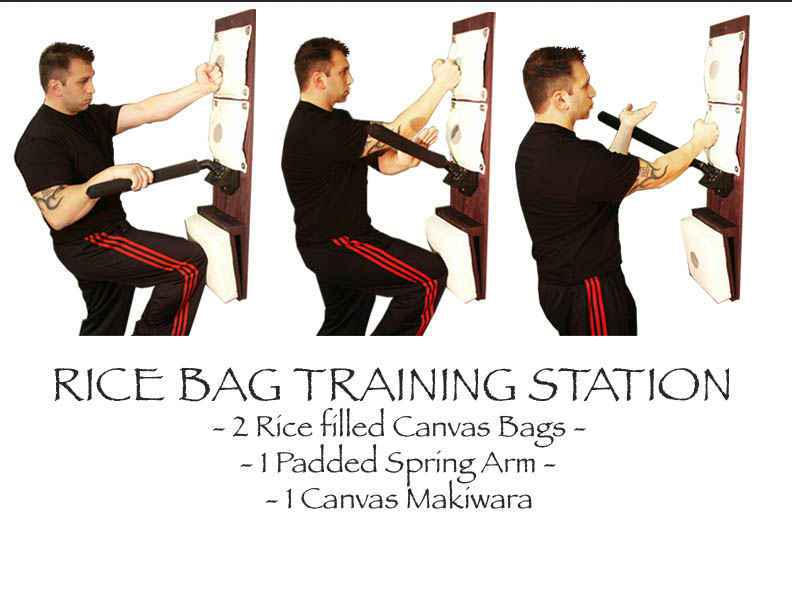 I would say the two products I am most proud of is the Recoil Reaction stand and the Rice Bag Trainer. I really feel that both of those products add pressure and action to training devise which to me makes for more realistic training. When you make contact with an attacker’s arm you will either move it or it will try to move you. Both of these devices emulate those elements.

Your biggest contribution to the Wing Chun community over the past 11 years?

Every product that I have designed and manufactured was created out of necessity. I was self taught for many years and not having a partner to do drills with is where I came up with the Rice Bag Training Station. It provided me with a padded spring arm which can be moved in all directions and always snaps back to the centerline. All the drills you do from the bridge position in Wing Chun such as Pok Da, and Lop Sau cycle can now be effectively trained without a partner.

What do you want the Wing Chun community to know about you and your dummies?

I would want the Wing Chun community to know that all of the Wooden Dummies are manufactured to the higher standard and are unique designs can benefit or practitioners from the highest level to the novice.

What is this I hear about your new 11th anniversary dummy? 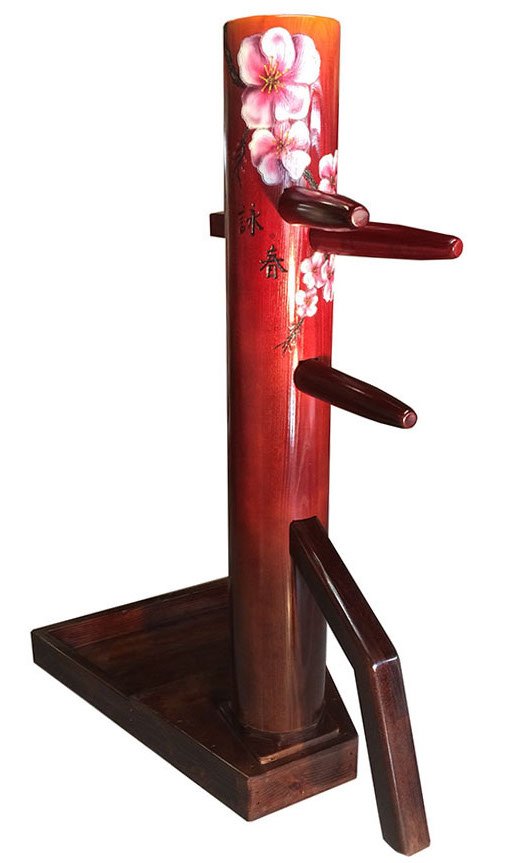 We just released our 11th year anniversary edition Cherry Blossom engraved wooden dummy. This Dummy, like all of our dummies is available and interchangeable on all six of our dummy stands. It’s a multicolored dummy containing four different color stains starting from the top Golden pecan into Sedona red then mahogany and then Jacobean dark brown at the bottom. All the colors are faded together creating that sunburst effect. The large cherry blossoms with their branches and buds start at the dummies top right side wrapping around the front all the way down below the middle arm on the left side. It’s simply a gorgeous piece of artwork and an effective training tool.

We have a few new product designs we plan on releasing sometime this year. Not to give too much of the idea away but it will be a single longer upper arm wooden dummy. The arm will have a groove representing the elbow and will represent the length of a full arm. This arm is going to have a unique function which I cannot disclose at this time and will definitely have action to it similar to most of our products.