The video is based and shot on the streets of Hong Kong, where Ving Tsun initially gained its reputation as a practical fighting art, bridging the generational and also the geographical gap. The audience is invited to delve into the minds, classrooms and rooftops of where Ving Tsun’s reputation and popularity was first forged.

WSL Ving Tsun: Core Concepts steers away from the standard lecture and demonstration format of usual DVDs. It is professionally filmed and edited with chapters that highly compliment the informational content with some cool storyboarding depicted in the form of “Street Scenes”.

The street scenes are a unique approach to how the concepts and actions being discussed can find their real practical application in an urban scenario. Jerry and Mark take aim at exploring the ideas of the Siu Nim Tau as it works in form, function and fighting in the real concrete arena. They articulately break down each step, both inside and outside of the classroom, while often going beyond the “how-to” demonstration to give the practitioner the genuine “know-how”.

Getting straight and to the punch, the two coaches hit the audience hard with information on how to understand the PVT Group’s Ving Tsun from the ground up, and from foot to fist. The importance of developing an effective punch is naturally the goal of every topic discussed, starting the audience off by building their mechanics through an understanding of structure. The function of form is to serve a controlled, balanced attack with the ability to, “use the structure to increase attacking power.”

Footwork takes a step forward as a highlighted topic to keep things flowing. The video never stands still and this section moves its way through strategies on how to engage an opponent, control the space, maintain balance, create and manage angles, and attack any opportunities. Jerry and Mark share their detailed insights, drills, and archival footage on the importance of proactive footwork for maintaining balance and control. As a result, the practice and development of those qualities and others outlined in this video via concepts and drills will result in developing efficient fighting skills.

The message is clear and consistent from the beginning to the end of the PVT Group’s first DVD communicating that one must cut through the “excess baggage” that is so common, and to instead be focused on what works logically and practically. Their system is developed and applied in the training methods of their late Sifu Wong Shun Leung’s fighting philosophies, complete with their own experiences in the contest and concrete ring.

The audience will be educated and entertained by this first chapter in their series without a minute or an action wasted. This is one information rich hour that you will watch over and over again, and comes with a bonus twelve minute section into the making of Core Concepts containing some humorous outtakes of the crew in action and whilst at play. Chapter One is a great addition to the library of any Ving Tsun practitioner, and an absolute must have for the WSLVT devotee. 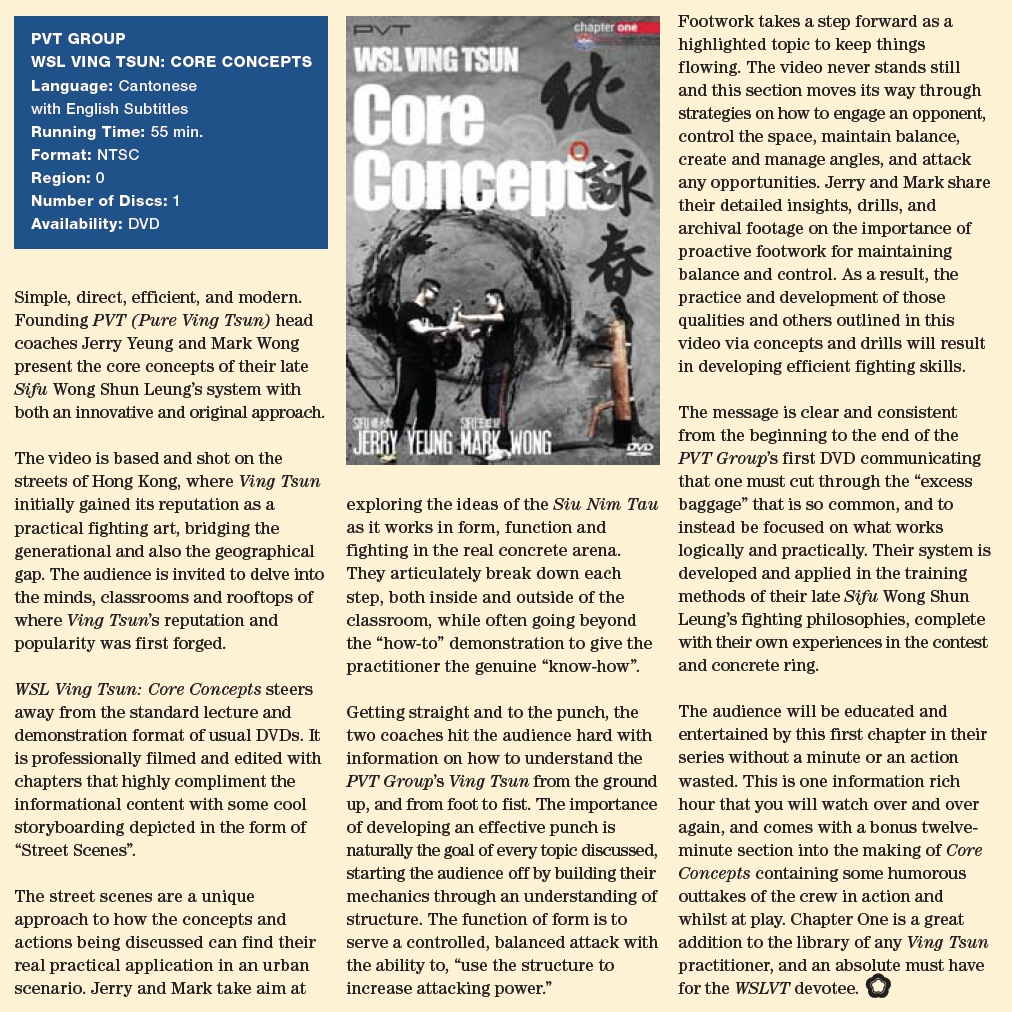