How to Use The Wing Chun Ring

This article is an excerpt from Tyler Rea’s Jook Wan Huen Bamboo Ring Article: The Devil is in the Details Part 5, which you can download by clicking the link. The Jook Wan Huen is trained in 2 primary ring positions, one with the arms inserted parallel to each other in the ring. The other with the arms polarized in alternating positions. For easier reading the Jook Wan Heun or Bamboo Ring/Hoop will be abbreviated to simply the JWR throughout the rest of the article. 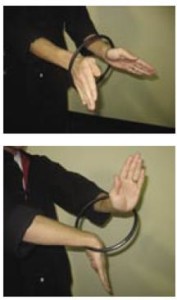 JWR’s are fairly easy to find on the Internet through various online merchants (www.everythingwingchun.com). If you have diffi­culty finding one that works for you it is just as easy to make one. Most Hobby shops carry a variety of macromay hoops & crochet rings, materials may also be found at your local hardware store.

Sup yat wan or “11 Links” are a series of 5 Polarized, 5 Unpolarized arm positions with one outer arm position for a total of 11. These Ring sets may be combined with an almost limitless variety of footwork

Allowing them to be trained in practically any system.

Throughout the course of this article certain basic training guidelines and cheviots will be presented with each exercise to help maximize the initial stages of practice.

One of the first things to establish 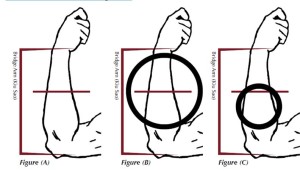 before training is to select or construct A JWR that is sized for your “Kiu” or Bridge Arm. To begin your Bridge Arm is the distance from your wrist to your elbow this Designates the surface area you use to feel and redirect the attackers pressure. Between the wrist and elbow make a non permanent mark to denote the mid line point on the forearm Figure (A). The circumference of your Training ring may be the full length of your forearm like the Length of Bot Jom Do Knife or it may fall to just before the Mid forearm line, Figure (B). Make certain to NEVER go below the Mid forearm line, to do so minimizes your training Circumference to the Ring and trains a point of pivot rotation That will not effect the attacker Figure (C).

If your JWR circumference goes below the Mid forearm line, it also makes it nearly impossible for both Bridge Arms to smoothly transition between positions with any measure of power. Training with a large Ring (one that has a circumference that goes beyond the wrist) is however OK, this trains the deltoids, trapezius and Lattisimus muscles to coordinate rounding the back and linking spine and stance trough pelvic lift.

It was felt by my teachers that the JWR movements predated the wide spread use of a Wooden Dummy regimen. Practically all JWR exercises can be found in the Dummy sets of most Wing Chun branches, the primary ones being Kwan Sao, Seung Gahn Sao, Po Pai Jeung, Tan Da, Pak Da and Sot Jeung. 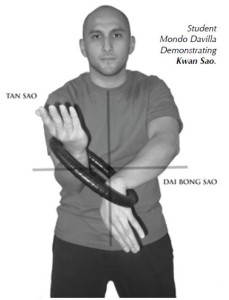 Let’s begin first with Kwan Sao because it is fundamental to all Wing Chun branches and is expressed in one of the two primary ring positions. Kwan Sao is often translated “Rolling hands”, or even called Chuen Sao (Turning hands). Those who train Southern Mantis know this movement as a combination of Sai Shu and Gao Shu Within Wing Chun, Kwan Sao is the integrated transition and deployment of Bong Sao (primarily Dai Bong Sao—Lower Wing Arm) changing to Tan Sao (Dispersing Hand).

The action of transition and change occurs on right and left sides, passing through all the 4 gates (Say Moon) with both Yin and Yang power arcs (Um Yum Bikging) of pressure. When posing the Tan Sao in the mid to high gate, the hand begins to descend as the hand that had been pos-ing Bong sao ascend up the center of the body just slightly in line with the torsos Mid line boundary.

When practicing Kwan Sao with the JWR & the Cheun Ma stance turn make sure you do not pivot beyond a rotation angle of 45 degrees from the centerline. This keeps the development of power & pressure within The structure range of the Jo Hao Ma (Left Mid horse) & Yao Hao Ma (Right Mid horse) positions, drilling power down the centerline over time. 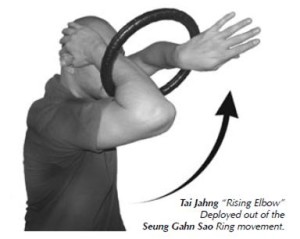 This movement is found in the Biu Jee form and wooden dummy set of most Wing Chun ring branches. Seung Ghan Sao is most often translated as double “cultivating” hands. It is more accurately described as double cleaving hands, the way a plow cleaves the soil. This description highlights the importance of SGS to displace the attackers movement while moving forward. SGS on a basic level is the reversed movement of Kwan Sao and, as such, the low Gahn Sao hand has elements of Gwat Sao.

Probably the single most important reason to train with the JWR has to due with point of rotation. In nature any display of power on a grand scale has to due with Rotation power. (Windmills, Tornados, Whirlpools, Planetary rotation and Planetary orbit, Super nova collapses or expansion etc.) When using the JWR the hands, and specifically the wrists are in constant contact with the inner circumference of the Ring, this causes the arms to rotate around an artificial pivot point. First: when the arms move in this way orbiting around this artificial pivot point they have greater mass than they would if the axis of rotation ran through the ulnar & radial bone area. (as well as greater deflection surface area.)
Second: through the rise and fall of the elbow, the arms generate greater power through the second most important element (the first being the change in pivot), Enhanced expansion and contraction of the arms ability to generate Power. This is further amplified through the integrated use of the spine (lifting of pelvis & rounding of the backs scapula), this and adding the bodies mass (through the stance rotation) more than potentially doubles the power produced.

Have you ever tried training with the Wing Chun Rings? If so, how do you train with them?

6 thoughts on “How to Use The Wing Chun Ring”