We will now take a look at the sword blade, starting with the cutting slope and the shape of the blade. These are very important because they dictate what you can effectively do with the sword (i.e. stab, chop, slice, block, etc). You should use a blade shape that will allow for the full range of techniques that your lineage teaches and helps facilitate the most important movements.

The cutting edge of antique stabbers generally rises on a diagonal to the tip.  This rise, called a negative rake, provides for a sharper point.  It trades off some efficiency on slices, chops, and covers (or blocks) with the cutting edge in order to improve stabbing effectiveness.  Eliminating the rake (called a zero rake) better supports slices and chops, which are emphasized in Wing Chun, but reduces the acuteness of the tip and increases the weight of the blade.  The positive rake, which is common in modern Wing Chun circles chops very well, slices well, but has a limited ability to pierce. Hung Gar practitioners prefer top-notch stabbing ability, so will always go for the negative rake.  Wing Chun practitioners use a mix of the three, depending on the lineage. 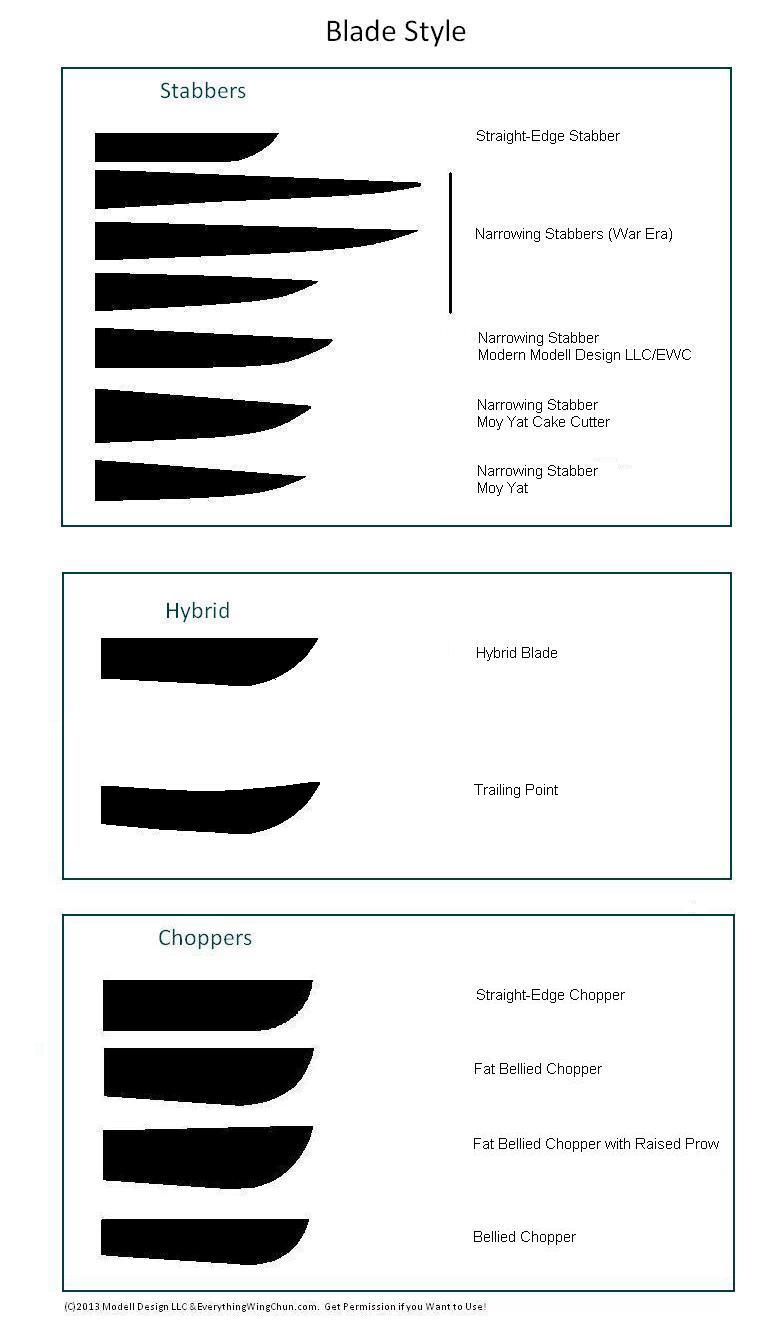 Hudiedao come in three basic styles:  a stabber designed primarily for thrusting, a chopper lacking a pointy tip intended solely for slicing and chopping, and a combination of the two able to do both but not optimal for either.  You should prefer a blade shape that will accommodate your full repertoire of techniques and facilitate the most important movements.  In some cases tradition mandates use of a particular blade style; for example, if you subscribe to the lore that Monks used knives intended only to maim, you may need a chopper so pure it is incapable of piercing.  In the end, it all comes down to what works best for you. That said, your personal style or lineage might require a different type of blade.

Narrowing Stabber:  Blade style with pointy tip where the top of the blade (the spine) slopes down to the tip, the sharp edge (the cutting edge) rises up to the tip or both.

Stabbers have a variety of profiles.  Most surviving antique Hudiedao are elongated triangular shaped blades from the War Era that narrow in width to create an acute tip.  The Narrowing Stabber is optimized for piercing opponents.  The narrower blade and sharper point facilitate this.  The triangular shaped blade is similar to how they made the swords in the Red Boat era of Wing Chun's history.  They are lighter and faster than choppers of the same length.  While they can still chop and slice, the chopper blade styles do so more efficiently.  That is not to imply that a narrow sword cannot be great for cutting – just think of a vicious Napoleonic Saber --, rather it is just a comment on specific Hudiedao designs.

There are a few surviving examples of Wing Chun-length narrow width stabbers but a lot of the shorter triangular bladed Butterfly Swords tend to look more like a wide cake knife.  There is even a photo of a Grandmaster Moy Yat posing over a Birthday cake with his swords! The shorter, fat stabbers saw historical use in the USA as well as China.  Photographs and accounts from San Francisco’s China Town encourage Ben Judkins, to speculate that the “shorter, more easily concealed, blade was becoming popular at the start of the 20th century.  These knives seem to be intended for chopping than stabbing and are reminiscent of the types of swords (bat cham dao) seen hanging on the walls of most Wing Chun schools today.”  Ben Judkins, A Social and Visual History of the Hudiedao (Butterfly Sword) in the Southern Chinese Martial Arts. posted January 28, 2013 in Kung Fu Tea http://chinesemartialstudies.com/2013/01/28/a-social-and-visual-history-of-the-hudiedao-butterfly-sword-in-the-southern-chinese-martial-arts/  (March 2, 2013).

Both the historical Narrowing Stabbers and our Narrowing Stabber designs feature a tip that is lower than the point where the spine intersects with the D Guard.  The tip is lowered to make it easier to align the handle and wrist with the tip (picture a central axis running through the blade) to improve power on thrusts.  Aligning the hand with the tip also improves control over the blade.  The spine is sloped down on a diagonal to accommodate that tip placement.

Straight-Edge Stabber:  A proportionately narrow rectangular shaped blade with the spine and cutting edge parallel and a pointed tip in line with the spine.

Another variety of stabber is a rectangular blade, basically a relatively narrow strip of steel until the point.  We call this a Straight-Edge Stabber.  The tip is aligned with the spine but seldom very pointy.  This style blade sacrifices ease of piercing in favor of better slicing and chopping.  The long straight cutting edge is also fine for covering or blocking.  This blocky blade shape is more of a lineage specific design, but one that is quiet popular.

Martial arts weapon pioneer Dr. John Lee believes this simple blade style is the original shape used for Wing Chun.  While it does not appear to have been used by Chinese War Era militia, Judkins proves it found a home with criminal gangs in San Francisco’s China Town and theatrical performers prior to its modern mass-manufactured resurgence.  The primal blade style is favored by Shaolin monks in Henan, China. 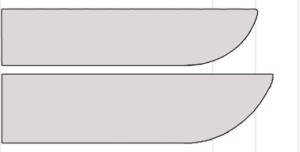 If the width of the blade of a Straight-Edge Stabber is increased the blade becomes a Straight-Edge Chopper.  As blade width increases, the arc of the cutting edge to the tip rounds so much that the tip is no longer capable of piercing.

A Straight-Edge Chopper is heavier than a Straight-Edge Stabber of the same length, blade thickness, tapers and grind.  An upside to using a heavier knife is more natural resistance due to its mass (and hence you need use less muscle and feel less impact shock) when covering or blocking.  The additional mass also adds energy to your strikes.  The downside is slower acceleration which means slower slices and chops.  The negative impact of the drop in speed on the rotational kinetic energy more than offsets the bonus from the increased mass.  You also may have more difficulty covering or blocking in time and outmaneuvering an opponent with blade work.

Most vendors’ choppers are heavier than stabbers of the same length since one is essentially just a larger sheet of flat steel.  With a finely ground high quality blade, the smith can make adjustments so the two blades weigh the same though each knife will have its own distinctive “feel” when used.

Bellied Chopper:  A blade shape with the cutting edge sloped away from the spine as it nears the tip and a non-acute tip in line with the spine.

A more complex chopper design features a cutting edge that slopes down on a diagonal as you move from the handle towards the point.  This is called a positive or forward rake.  It results in a belly akin to that on a Guppy near the front of the blade when the cutting edge arcs up to the tip.  In knife terms, the curving portion of a blade under the tip is the actual “belly” but for purposes of this article we are referring to that Guppy chest.  The curvature “presents an ever-changing angle to the material being cut, and this means slicing efficiency is preserved across the cut.”  The positive rake provides more edge for the blade size.

If your form has even a single stab, a pure chopper is the probably the wrong blade shape and functionally you need either a hybrid or stabber style. That said, on a well made chopper (like EWC’s) you can see that a stab to the right area will penetrate an inch or two.

TIP: The Hybrid Blade is a more versatile substitute for a pure chopper.

Hybrid Blade:  A hybrid blade shape that combines a tip capable of stabbing with the bellied chopper blade style.

The Hybrid Blade style was introduced to the modern martial arts community by EWC and Modell Design in 2010.  We now regard this innovation as a rediscovery since Dr. John Lee’s continuing field work in China has led him to conclude this blade shape, in a different length, was the original White Crane Butterfly Sword style.  The Hybrid Blade is a mix of a bellied chopper and stabber.

We feel strongly that even though most Wing Chun lineages use choppers, they still need the ability to occasionally stab.  Most chopper BJD are too blunt and rounded at the tip to stab effectively, while most stabbers are too thin and insufficiently rounded to accommodate the major emphasis on slicing and chopping of the majority of Wing Chun lineages.  This design is also in harmony with San Soo.

While the point on a Hybrid Blade’s tip cannot be as acute as that of a pure stabber, it is sharp enough to pierce and mean enough to do a lot of damage on a thrust.  The Hybrid Blade does sacrifice some belly and cutting edge length to facilitate stabbing point, but is still an excellent blade style for slicing and chopping.

On the blade shape chart, you may have noticed a blade profile with the point higher than the spine.  We reluctantly classified it under the hybrid header because it is pointy and has a belly but it is a different animal than our standard Hybrid Blade style.  The geometry is known as a trailing point.  The tip is smaller than an ordinary tip concentrating the force for an easier penetration.  The area near the spine can be flat, ground but not sharpened or sharp – it is a trade-off between strength and sharpness.  If the spine is unsharpened, it will force the primary cutting edge down into the target so it does more damage.  This blade style is extraordinarily rare on modern Hudiedao.

Every so often Modell Design comes out with some really crazy modern designs.  They are usually challenging to make, expensive and aimed at the knife collector market. Many are too far out for Wing Chun practitioners but a number have found a home with EWC and are up for sale to the Wing Chun community.

In 2012 Modell Design made 14 pair’s of BJD patterned (with permission) from Doug Kennefick’s famous Randall Sasquatch knife design.  The design combined a proven Chinese weapon with one of the best (and most difficult to make) modern Western knives.  The blade shape is a known as our recurved hybrid.

It features a compound grind that has the appearance of a hollow grind but a far studier grind at the cutting edge.

For 2013 Modell Design made a “Nightmare Grind” BJD.  The grind is also based off a Western knife design and is named due to the fact it is very challenging to make. These are now in production.  The prototype pair sold for $1,695 in just a few days. Don't worry, EWC has commissioned an affordable professional martial artists’ version!

TIP: Be careful of Butterfly Knives of unknown origins, especially sharpened blades.  If you value having all your original body parts, you might want to be careful.

Enjoyed this article? Click here to continue your sword education and learn about the importance of Blade Length